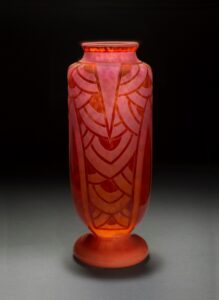 Clean lines, geometric shapes and bright colors characterize this exhibition of more than 100 early 20th century works by iconic Art Deco Studios such as René Lalique, Daum Frères, Steuben Glass Works, and many others.  Assembled through the keen and practiced eye of renowned contemporary glass artist David Huchthausen, each piece in this exhibition takes viewers back to an extraordinary time in glass history.

Organized by the Museum of Glass, Tacoma Washington. 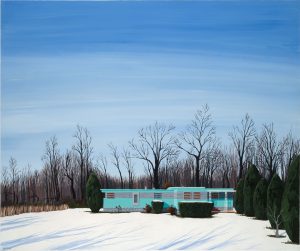 Mary Putman: Art is About Us

For the Delaware-based painter Mary Putman, art is—and has always been—about us. Putman’s focus on the landscape over the course of her prolific career has allowed her to probe this simple yet powerful statement. Her paintings explore the vast and complicated interconnections between the land and its occupants. Putman meticulously depicts the world she lives in, representing recognizable buildings, farmland, cars, road signs, bridges, people, animals, trees, and bodies of water from unusual and sometimes surprising perspectives. As a result, her paintings often combine the familiar with the unfamiliar, drawing viewers in to visually examine the landscape of Delaware and its surrounding areas so we can see ourselves anew.

An exhibition catalogue co-authored by the University of Delaware and the Biggs Museum of American Art will be available on March 2.

Icons of  Rock, Blues, and Soul

The iconic photographs of Larry Hulst capture the freewheeling energy of live music and the enduring visual spectacle of rock’s greatest performers. From Janis Joplin and Jimi Hendrix to David Bowie and Lauryn Hill, Front Row Center: Icons of Rock, Blues and Soul brings together over 70 images of legendary musicians and singers across three genres and generations. The exhibition charts Hulst’s extraordinary path through the pulsing heart of the most exciting live music of the last century, showcasing a unique visual anthology of rock, blues, and soul music from 1970–1999. These images, which have been featured on album art and Rolling Stone spreads, convey Hulst’s lifelong passion for the magnetism, immediacy, and unpredictability of live music. With photos that also document the unforgettable voices of funk, punk, and beyond, Front Row Center grants viewers an all-access pass to some of the most memorable performances in popular music history.

Check back frequently – exhibition and event details are updated often!